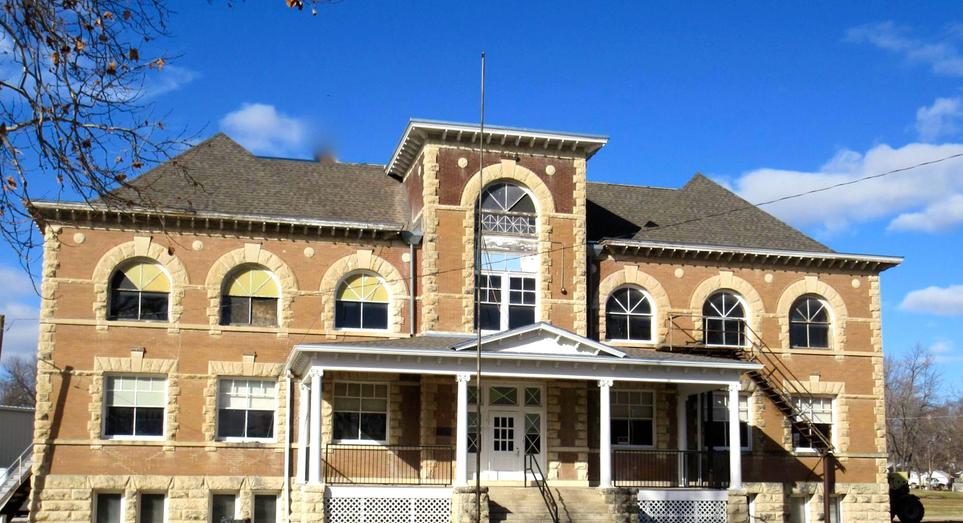 do you have history to share?
we'd love to hear from you!

would be let soon. Shortly thereafter, two Frankfort men, Olaf Anderson and John C. Reipen, were awarded the contracts, respectively, for the stone work and carpentry work. Excavation of the basement was completed by mid-December, and the school house was finished in time for classes to begin October 19, 1903, although the opening date had been somewhat delayed. The final cost of the building as estimated to be $20,000.

At first the elementary school used the first floor and a three-year high school occupied the second floor (the fourth year was added in 1905). As the population of surrounding rural areas decreased, many schools were consolidated with Frankfort District No. 35. Following the construction of a new high school in 1923, the building has been used only for elementary classes.
The building is an excellent example of Renaissance influenced turn-of-the-century school architecture in Kansas.

The Frankfort School is a two-story rectangular structure in the Renaissance style with a full basement partially above grade. Located at the northwest corner of Locust and Fourth streets, the building is situated at a 45 degree angle and faces southeast. Its walls are constructed of greyish-brown face brick trimmed with limestone. The basement is faced with rough-hewn limestone blocks laid in uniform horizontal courses. The shingled roof of the building is segmented into four quarters each with a hipped roof. These are interconnected with a steeply pitched central roof. Emphasizing the roof line is an unusually wide overhang which is decorated by closely spaced wood brackets on the soffit. A broad one-story porch supported by six wood columns with ionic capitals emphasizes the main entrance on the southeast facade. Another outstanding feature that makes be building particularly notable is the use of decorative stone trim, especially at the windows. The basement windows occur in the stone basement walls with simple sills and jams. A massive ribbon of rough-hewn stone blocks occurs at the first floor line and separates the stone from the face brick above. It also forms the lintel for the basement windows. The first floor windows are double wide rectangular openings with smooth stone sills. The sill stone occurs continuously around the building as does a stone band at the window head. Rough-hewn stone blocks of alternating width ornament the first floor window jambs. The window heads are flat stone arches of rough-hewn tapered stones with large smoothed keystones. The second story windows are double wide with stone sills and jambs similar to the first floor. The seconds story windows have a semi-circular arched head of large blocks of stone with a huge keystone. Stone quoins of alternating width rough-hewn blocks are used at all building corners. A massive brick chimney with stone quoining rises at the center of the northwest facade.

The only major changes to the building's exterior have occurred above the roof line. These changes include a cupola formerly situated atop the entrance tower and dormers similar to the one behind the chimney were located in each of the outward facing segments of the hip roofs and centered on each side, except the front.

As taken from the National Register of Historic Places Nomination Form dated June 14, 1972.

The Frankfort School was erected in 1902-03 to replace an 1880 building which had been struck by lightning on August 20, 1902, and burned beyond repair. Within weeks after the fire a local architect, A.W. Snodgrass, was hired to prepare plans and specifications for a new school building. On November 21 a picture of the proposed structure was printed in the Frankfort Review, along with an announcement that the contract for construction